David King is the ignatz nominated cartoonist behind the online strip Danny Dutch.

A print collection of the strip will be debuting at APE (or so i've heard?).

1. can you describe your drawing routine---how often you draw, how many hours per day---how you break up the day with drawing?

I draw maybe two or three hours a day, four or five days a week or much less than that if I'm doing good. It's all in the evenings. Once I get a strip done for the week I'll take off whatever days are left until Sunday. I've been watching Leave it to Beaver on Netflix while I draw lately and I think that slows me down a little, but I'd get bored and lazy if I were only drawing. If I'm unfortunate and have a deadline I'll have to hunker down on the weekend or something, but I try to avoid that kind of pressure. I don't keep much of a sketchbook and I'm not someone who compulsively draws; I pretty much only draw if it's for a comic strip or if I get conned somehow.

Not much. Sometimes I'll change the dialogue on the fly while I'm drawing. After I finish inking I always do some white-out clean up, never any all out revisions. Occasionally if I think something is getting really sloppy and bad while I'm drawing I'll start over on a panel.


3. talk about your process---do you write a script or make up the drawing as you go?

Typically I come up with a strip idea just going through the day, or more often in the middle of the night, and jot it down in my sketchbook, dialogue only in a four panel grid. I might have an idea for the visual, but mostly I only decide which characters I'm going to use and don't bother with situations/backgrounds until I get started with the real drawing. Sometimes I come up with a funny strip and to get the timing right I have to have the whole thing planned out in advance, but I don't think of funny strips too often.

When I get to the full drawing part I'll pencil in the dialogue on the paper and then come up with the visual scenario, sometimes literally related to the words, or sometimes not related at all, then get busy with the drawing.


4. do you compose the page as a whole or do you focus more on individual panel composition?

Individual panels, but since I'm mainly doing one page strips I guess the composition of the whole page comes into play a little bit, as it is dictated by the grid.

14x17 Strathmore series 300 Vellum Finish Bristol is what it says. I have a small coil bound book of grid paper that I made so it would be easier to quickly draw comics panels, but it hasn't gotten much use.


7. do you read a lot of comics? are you someone who reads comics and then gets excited to make more comics---or is your passion for making comics not linked to any particular love for other comics?

I really like reading comics, but I don't read as many as I used to. The last couple of years I'll buy a bunch of stuff at Comicon and work on that for the rest of the year, maybe go to a comic shop a couple times. Reading comics, though, doesn't get me too hot to make my own stuff, I think I would make comics regardless. Once in a while I'll read something that's really good and inspires me, but usually I read them so fast that I forget everything right away and there's no impact. I wish I would see more stuff that really blows me away--where is it? I just finished reading two years of Gasoline Alley and while it was pretty great, it didn't ever get my gears turning intellectually or anything; something like Polly and Her Pals Sunday strips may have neat concepts and beautiful drawings but I need more than that, but I can't really put my finger on what "that" is. And naturally my own comics are in the same predicament; I can see that they don't have the depth that, as a reader, I'd like to see, and I don't know how to give more (yet?).


8. do you make comics for a living? if not, how do you support yourself, and how does this relate to your comics making process?

I don't make comics for a living, I work in a blueprint shop (it's really just oversized photocopying, nobody really does real blueprinting anymore). Work is close to home, so I'm not so tired after a commute to go home and start drawing. Sometimes I bring my comic to work and draw during my downtime, but I can't do any inking because it's not comfortable enough there and I'll make a mess. It's a pretty nice place to work so I guess "spiritually" it keeps me relaxed enough to get good comics done. If I hated the job and came home grouchy or zombied everyday it would have a sour effect on the comics and everything else.


9. do other artforms often seem more attractive to you?

No, all I like and know how to do is comics. Well, I have a MIB* sewing machine and keep toying with the idea of designing and making stuffed animal versions of my comic characters, but I don't know any girls who will teach me to sew. I'd also like to take up the violin again maybe--but for now comics is the only thing that interests me.


10. what artwork (or artists) do you feel kinship with?

Well, generally, I like other cartoonists who are trying not to do the same old stuff and not trying to emulate somebody else. I don't like it when people become complacent in what they do, I want to see change and improvement. It's interesting and thrilling to see other people using the standard cartooning craft technology/techniques to make stuff that hasn't been done before. I also like cartoonists who have a dirty sense of humor. Sorry, I didn't name any names...I like all kinds of cartoonists, but I don't know much about any other visual art. I feel kinship with Cat Stevens music.


11. is a community of artists important or not important to you?

It's nice but unnecessary. I don't know any other cartoonists where I live, there's no "scene" that I know of. So, outside of Facebook or whatever I couldn't be more isolated but I'm still getting stuff done. If there was a bunch of fun-loving cartoonists to hang out with I'd probably never do any work.

I don't know, I never talk to them about it or show it to them. They think only pussies draw comics and I'm not about to prove them right.

The visual experience is just as important and the conceptual experience, they go hand in hand. I don't go in for comics that are just drawing exercises, or flashy storyboards. Sometimes I make something that comes out like that and it's really disappointing, feels like a waste of time. I guess I'm assuming you mean visual style? I mean, even if a cartoonist has a standard method for getting his ideas across, the idea is primary. Of course, his method still has to work.

I like doing it, but it's not easy or anything. I don't really love it, if I had a robot that could do the drawings the way I want that would be great. But it feels pretty nice to draw something that looks good and works. It's better than digging ditches!


15. when you meet someone new, do you talk about being an artist right away? do you identify yourself as an artist or something else?

I never talk to anybody about comics or art. I identify myself as a "regular person" or "just a dude".


16. do you feel at all connected to older comic artists like Seve Ditko or Jack Kirby---or does this seem like a foreign world to you?

In a way, craft-wise, I feel connected to those old guys. I learned how to draw from old comics, and older comics that I read now probably still sink in a little, too. The output of earlier generations' cartoonists is pretty otherworldly. Kirby did like 5 books a month; There were newspaper strips guys without assistants who did daily strips for years and years--how? I'm pretty sure I'll never be at the same level as those guys, and I don't imagine myself doing similar material, but I still maybe aspire a little bit to do a comic as well as Kamandi

However, since just about my only inspiration for drawing has come from early comic strips and 60's-80's superhero comics I'll have some trouble doing it another way; meanwhile there are newer cartoonists who haven't read any of that stuff, they're going to figure out some wild ways to make comics as time goes on. Sometimes I wish I knew more people like that to leech ideas from.

Yeah sometimes I'll get lazy, or if a drawing isn't going my way I'll feel like quitting, but really all I'd need is a week off or so, and to eat more vegetables. But when I'm really cooking at it, comics is all I think about.

Like as in drawing from life like you used to do with a model in school? No, but sometimes I think I ought to. Other times I think it might be better to just keep using my imagination to draw big headed midget people.

If you mean, "do your comics draw from your own life?", the answer is still no, because my life is boring and dumb and my comics are merely boring. Well, I guess they're dumb, too.

I've done some mini-comics where it's all drawn immediately with a pen, but that's all just stick fiqure type stuff. Almost always I pencil first.

Lately I've just been sitting on the floor, but I also have a table set up back there. 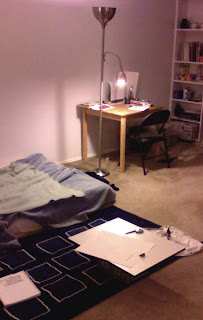 Posted by Austin English at 8:58 PM

I love this blog- its a great idea. I love to read about the way that other comic artists work- and seeing their workspace is an extra bonus!

This is a great idea for a blog, maybe a few more images would help though?
I recently had the opportunity to interview Ronald Searle. Details on my blogs-

I like the idea of it just being words. It makes it more about what is being said. As long as you provide links to the artist websites, we'll be able to find them.

im trying to ask people to send an in progress page. i dont want more images then that.

David have you read Mark Newgarden?

Not too much, Jesse. That fuzzy Fatagraphics book of his has been in my wishlist for awhile, though. Why??