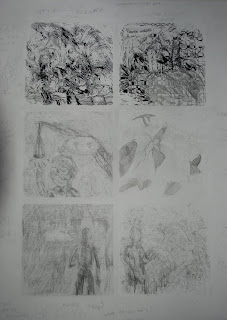 Jason Overby is the author of (in my opinion) one of the stand out mini-comics of 2008. It's called "Jessica." This is his website: http://www.discretefunk.com/

Above image is an in progress work from overby.

1. can you describe your drawing routine---how often you draw, how many hour per day---how you break up the day with drawing

I draw in my studio very nearly every day for at least two hours. I'm rarely there more than four hours at a time. I used to only work in coffee shops, and this established the two hour time frame (you feel like a jerk nursing a $1 cup of coffee for longer than that). On days I go to my job I'll either draw immediately before or after work (depending on how early I have to be there.). On my off days I try to get there as early as I can.

2. how much revision/editing do you do in you work?

For my minicomic, "Jessica," I revised a whole bunch. It took about three years to make the thing, and I was constantly fussing with the overall conceptual framework. It ended up being 28 pages, but I drew well over a hundred (including redrawing some pages). I didn't ink the letters until the very last so I would often "rewrite" pages (lots of times having them relate to completely different aspects of the "story."). I changed the order of the pages a lot, also, trying to find the best sequence for clarity/rhythm. I went through maybe five different versions before cutting and restructuring it from around 60 pages to the final 28.

I've been trying to make strips lately without editing so much lately, but I'm not sure it's gonna work.


3. talk about your process---do you write a script or make up the drawing as you go?

Individual pages I'll sometimes script/thumbnail out, but I mainly draw/write at the same time with some idea in mind about the overall story I'm telling. I like for the drawings/text to work together organically, creating a context for the meaning/story as opposed to using pictures as discrete linguistic chunks or hieroglyphs that operate inside the panels like words within sentences.

See previous question for the process of "Jessica."

4. do you compose the page as a whole or do you focus more on individual panel composition?

7. do you read a lot of comics? are you someone who reads comics and then gets excited to make more comics---or is your passion for making comics not linked to any particular love for other comics?

I cycle through periods of reading comics/hating comics. Seeing great comics (like recently a Hankiewicz piece reprinted in Brunetti's first "Anthology of..." about Bellow's "Adventures of Augie March" and a colored Frank King Sunday in the same volume) totally gets me excited about making them.

8. do you make comics for a living? if not, how do you support yourself, and how does this relate to your comics making process

I've yet to make any money from comics (lost a lot printing and distributing minis, though), which might be good because it allows me to be fairly self-indulgent. I work a day job (barista for Stumptown Coffee Roasters, which I really love) four to five days a week, but I always make time to draw.


9. do other artforms often seem more attractive to you?

maybe writing or music. I get frustrated with how conservative 99% of cartoonists seem to be, but I grew up with comics and love them.


11. is a community of artists important or not important to you?

kinda important in that it's nice to not be working in a vaccuum, but not essential to making work.

I think that maybe the two are inextricably linked.

While it can be maddening and frustrating, nothing is more satisfying and spiritually fulfilling.

15. when you meet someone new, do you talk about being an artist right away? do you identify yourself as an artist or something else?

I almost never mention it.

16. do you feel at all connected to older comic artists like steve ditko or jack kirby---or does this seem like a foreign world to you?

I love both of these guys. While the subjects and stories they pursue(d) aren't always to my taste, they are both visionaries which is much more interesting than anything else.

My wife's about to have a baby, and for the first time in eight years comics have been seeming relatively meaningless.

Very rarely - usually only if I'm either making a particular conceptual point or if I can't make something look right otherwise. I like to use imagery in comics that expresses an idea or thing in an interesting way, and it doesn't necessarily matter to me whether I'm accurately simulating the way anything looks (whatever that means).

19. do you pencil out comics and then ink? or do you sometimes not pencil?

I pencil the pages and then ink directly over the pencils. I'm really just tracing 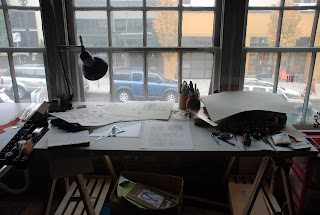 Posted by Austin English at 2:25 PM

jason overby is doing some of the most original/intense looking shit ive ever seen. i love his stuff.

Nike shoes
puma shoes
Cheap nike shoes
NIKE’s headquartered in Beaverton, Oregon.Nike may be one of the youngest of the major brands, but it is the dominant brand around the world.In 1963-1964 when University of Portland track coach, Bill Bowerman, and Phil Knight, a mid-distance runner joined forces to import and provide low-cost, high tech running shoes from Japan in order to provide alternatives to the German-dominated athletic shoe market.
Discount nike shoes
Wholesale nike shoes
Nike shox r4
Operating under the name Blue Ribbon Sports, Bowerman and Knight began to sell the Japanese Onitsuke Tiger (Nike SB) running shoes. Jeff Johnson, a former rival of Knight, joins the company in 1965 as their first full-time salesperson and sells shoes from the back of his van at local and regional track meets until opening Blue Ribbon Sports’ first retail outlet at 3107 Pico Blvd, Santa Monica California.
nike shox shoes
nike air max
nike running shoes
The Superstar is one of the first designs the Adidas manufactured.The tongue is leather on the outside and cloth of the inside and is thick enough to feel padded, but thin enough to not feel like an obstruction. The heel of the shoe holds up well the curve of the front is great for any kind of feet.
cheap puma shoes
discount puma shoes
nike air max tn
Therefore, Adidas is a collection of trust and respect. Product and marketing initiatives at Adidas primarily focus on five global priorities: football, running, training, basketball and Adidas Originals sneakers. Adidas sports the recognizable logo of three slanted parallel bars of ascending height.
puma mens shoes
puma running shoes
wholesale puma shoes
Everybody like beauty, which is quite commen, especailly womens. Welcom to our store which is focused on sellingghd hair straighteners mk4and hair straightners. For women, especially the young girls, this ghd iv styler hair straightener is the best choice. ghd hair straightners is famouse for the pretty outlook and the top quality. The price of this cheap ghd hair straighteners is acceptable and rational. Ed Hardy Jeans, Ed Hardy Hoodies ed hardy shirts ed hardy clothes ed hardy clothing
ed hardy trousers

I collected all the Jason Overby comics because those are great I still having some of them but even those are a little bit old it is something that reminds me my childhood. Generic Viagra

Thank you..Keep sharing this kind of information. Such information is necessary and effective for readers.Your sharing of this information has made me understand the importance of the topic.
Space Bag Review

So far thousands if not hundreds of thousand Singaporean had complained about housing policy and instead review his own policy, he is pointing the 'GUN' to WP as irresponsible. I think Mr Mah should have a self-reflection and not living in his own world.
Lasix Generic

Pretty insightful read. Never thought that it was this simple after all. I had used a lot deal of my time looking online for someone to explain this matter clearly to me and you are the only one that ever did that. Great big thanks! Have a great day.

This is the perfect blog for anyone who wants to know about Generic Lyrica Online topic. You know so much its almost hard to argue with you (not that I really would want...HaHa). Metformin Online definitely put a new spin on a subject thats been written about for years. Great stuff, just great!

It's remarkable to see your nice runescape gold introduction, and I'm going to bookmark rs gold this and come back to it. Keep writing! I really love your blog and benefit of your buy runescape gold easy decriptions.

Pretty insightful read. Never thought that it was this simple after all. I had used a lot deal of my time looking online for someone to explain this matter clearly to me and you are the only one that ever did that.
You can learn more: China tour packages | China travel packages | China Travel Agency

AllMandarin is the only company that can give you an excellent alternative to learn Mandarin Chinese that is not only better, but also more efficient in terms of cost, flexibility and learning methods.I am a Chinese teacher,you can learn more about Free Chinese language info: Learn mandarin online | Learn mandarin Chinese | Mandarin Teacher

The best place to learn Chinese online is in China. However, we understand that it isn't always possible to move here to learn Chinese language. The next best thing is to study with our experienced teachers in a virtual classroom. Online students enjoy the same excellent way of mandarin online lessons and custom designed courseware that we provide for our face to face clients.